Year 6 have been investigating angles. We have been practising our protractor use and applying this skill to a range of problems and puzzles. Some children even managed to form an algebraic expression of the rule they noticed when exploring the interior angles of regular polygons.

Year 6 have been learning about micro-organisms and have had the chance to investigate the conditions yeast needs to grow and thrive. We worked collaboratively in our groups to pose a question about yeast’s growth, plan our investigation and undertake it to find results. We were able to observe the yeast’s growth through observing how much gas was collected in the balloons.

To finish off our Topic about Shakespeare, Year 6 researched the Globe theatre using books and the Learnpads in order to create a poster and built a scale model of the theatre itself. Each session that the children worked on the project they decided on who would lead the group and which roles people would take on. This enabled the groups to work well together and communicate effectively.

The children were asked to RESPOND to their learning during this topic using only one or two key words in order to convey the greatest meaning.  Each group were given the start of a seasonal sentence and invited to give an answer.  The words that were shared are a powerful reminder of what our focus ought to be this Christmas time.

Before you watch their short film, take time to think about how you would respond if asked…

The true meaning of Christmas is… 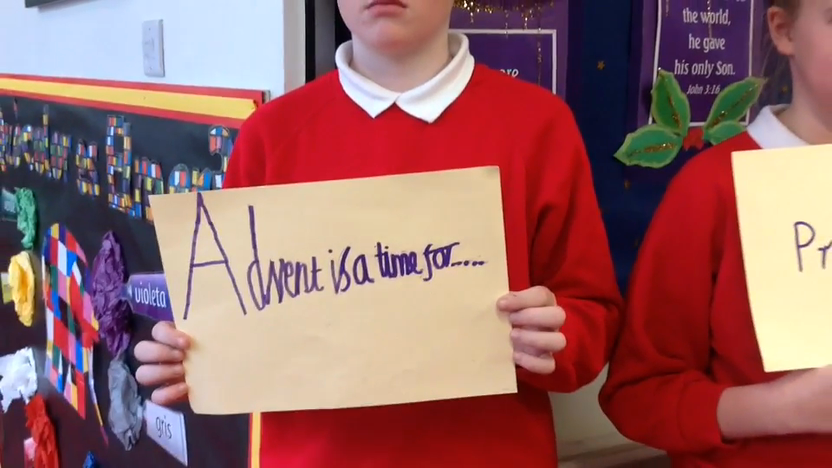 Actors from the Young Shakespeare Company visited our school and performed an interactive version of Shakespeare’s Macbeth. Their performance used all the original language. To help us to understand, we could all take part in some scenes and one of the actors worked with us to follow the plot.

We took part in a range of drama activities to fully understand the story of Shakespeare’s play Macbeth. We acted out parts of the play in groups with actions, worked on activities to vary our tone of voice and took on different roles in different scenes so that we could follow the plot.

Year 6 have been learning about equivalent fractions, decimals and percentages. We have been practising finding equivalence using jigsaw puzzles and the fraction magnets.

After our visit to the British Museum, Year 6 had the chance to debate the topic, ‘The Elgin Marbles should be returned to Greece.’ Every child had the chance to share an opinion with the class in role as: the Greek government, the British government, tourists visiting London, tourists visiting the Acropolis or custodian of the British Museum. The children succeeded in speaking with great clarity, using a formal tone and asked some very insightful questions.

Year 6 enjoyed a brilliant day at the British Museum recently. We had the chance to look at a range of real Greek artefacts and found the busy gallery very impressive. Back in class, we have used our experiences to debate whether the Parthenon marbles should be returned to Greece or remain in the museum.